In January, I joined a team of researchers in Amsterdam to explore the online communities of ‘Alt-left’ and ‘Antifa’ using data from Twitter and Reddit. This was one of many projects all taking place as part of the Digital Methods Initiative Winter School, organised by the University of Amsterdam.

In particular, we wanted to use the data to find out whether the so called ‘alt-left’ represents a genuine community or if it’s simply a construct of the alt-right in the latter’s attempts to promote a false equivalence, as has been claimed.  We were also curious to establish whether alt-left overlapped with Antifa online, or if they were two distinct communities.

For the first question, we collected a list of top 20 hashtags associated with both ‘alt-left’ and ‘Antifa’ keywords. We found very little overlap between the two groups. Notably, the discourse of the alt-left (shown in green below) consisted of more words that could be considered ‘mainstream political dialogue’, compared to the ‘Antifa’, which seemed more fringe.

The latter’s hashtags contained references to lesser-known terms such as ‘democratTerrorism’, along with the names of some Japanese Antifa groups. From this data, we could reasonably conclude that the alt-left and Antifa are separate, distinctive discourses.

The term ‘alt-left’ arrived in the mainstream after Donald Trump used it when talking about the violence around the ‘Unite the Right’ rally in the US city of Charlottesville. He condemned groups on both sides of the violence, saying: “What about the alt-left that came charging at, as you say, at the alt-right?”

Subsequently, there has been discussion in the mainstream media about whether alt-left really exists. It could simply be a construct of the far-right as it attempts to gain moral ground against its opposition by creating a false equivalent that can be painted as equally, if not more, violent.

The next section of our research examined this question in more depth, using Twitter data to give a clearer picture. We compared the top 50 Twitter users for both the #altleft and #Antifa hashtags, by looking more closely at their bios and timelines.

Right-wing conservative Trump supporters dominated the alt-left group, while the Antifa group was populated by a strange mix of accounts posting ebay related tweets and tweets in Japanese promoting the ‘Antifa Handbook’.

A deeper dive, this time into the most influential hashtag users (influence = most followed), produced illuminating results. For both keywords, we identified the majority of influential users as pro-Trump conservatives, with the exception of one rather prolific Japanese bot.

We found three significant users who overlapped with both terms: both pro-Trump. The common thread connecting both altleft and Antifa hashtag users appears to be their support for Trump, rather than specific alt-right features.

The below Gephi graph shows the different communities grouping around the Antifa keyword on Twitter. As can be seen, the biggest cluster represents American, right-wing Trump supporters.

We also created an equivalent for the alt-left hashtag communities. This graph is less consistent, but the striking feature about it is the large purple cluster, with one Twitter account ‘kwilli1046’, at its centre, meaning this user is extremely influential. 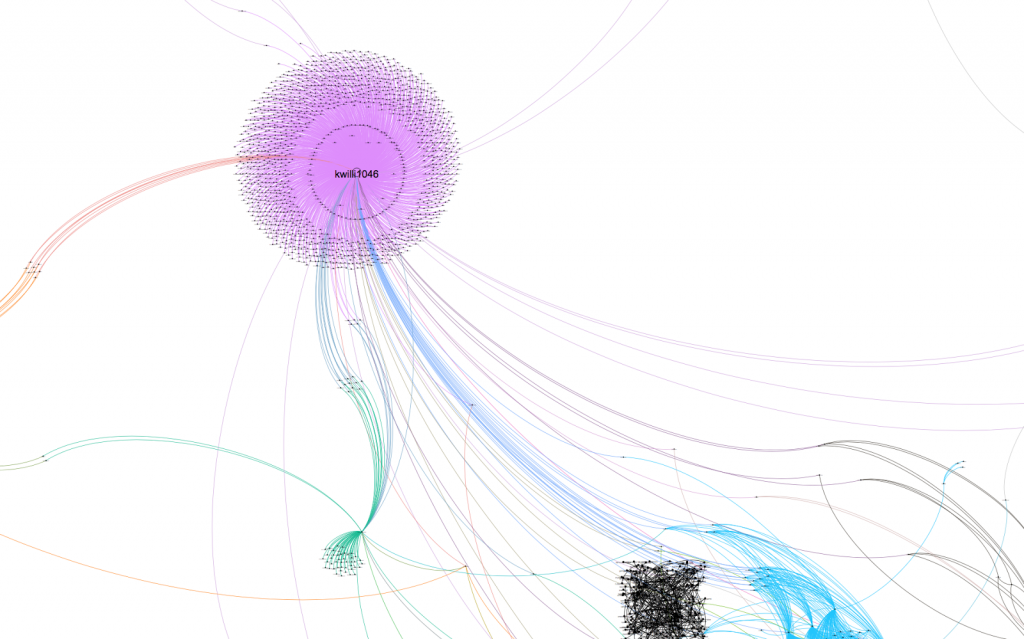 A screenshot of his profile is shown below. ‘Kevin W’ has around 88k followers and a bio link to a page on Gab, the alternative ‘free speech’ social networking platform where many of the far-right have ended up after being kicked off Twitter. 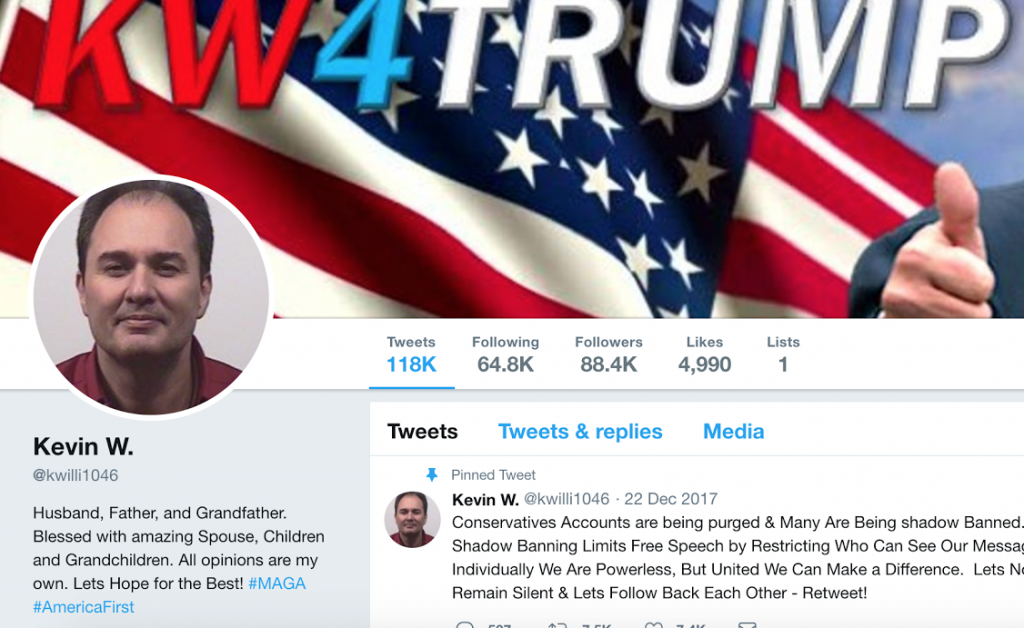 In conclusion, we found that the ‘alt-left’ does not exist outside of an online construct. In addition, the alt-left is mainly a term propagated by pro-Trump accounts in their attempts to create a ‘faux-public’. With so many of these accounts being pro-Trump, this could potentially point to the use of state-sponsored bots and organised trolling to push the alt-left as a form of disinformation. This could be a worthwhile topic for building on the findings of this research.