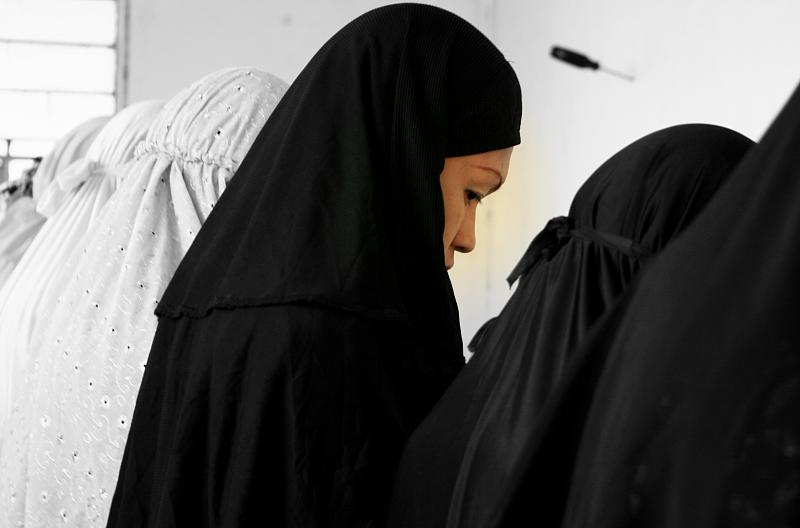 “During times of universal deceit, telling the truth becomes a revolutionary act”

Through misinformation to political change

Misinformation about Muslims (including refugees, immigrants and ordinary citizens) has been used to construct harmful narratives, reinforce existing Islamophobia and, arguably, create a fertile environment for enacting profound social and political change. Although the role of Islamophobia in the media has been explored in depth, less research has been done into social media, especially the role of social media images. These images are highly susceptible to manipulation when taken out of context, or attached to wholly fake news. They can be used to promulgate certain political agendas, heighten divisions in society, and cause actual harm to vulnerable groups.

In March 2017, shortly after Khalid Masood attacked Westminster, a certain image began circulating on social media. It depicted a young woman wearing a hijab. She had a distressed expression, clutching her phone as she walked across Westminster bridge. Behind her, one of Masood’s victims lay on the pavement, surrounded by concerned passers-by. The image went viral across Twitter, Facebook and a range of anti-Islam blogs.

The intense discussion it generated focused on the recurring narrative of the woman showing ‘disdain’, which degenerated into intense Islamophobic stereotyping. Some users implied that the woman had sympathies with the Westminster attacker. Others posted tweets and comments in her defence but the damage had already been done. It seemed as if yet another layer had been added to long-standing negative public perceptions of Islam and Muslims.

There are many studies on the portrayals of Islam and Muslims in the print and television media. However, the social media realm remains relatively under-studied in this regard, in relation to its size, prevalence and increasing influence upon shaping social attitudes. Research suggests that negative attitudes towards Islam and Muslims remain frequent in the social media context (Törnberg and Törnberg, 2016).

Users commonly perceived Muslims as ‘a homogeneous out-group embroiled in conflict, violence and extremism’ (ibid., p.133). In general, Muslims and Islam are regularly portrayed in the UK media in a variety of negative contexts, such as being a ‘threat to security’, a threat to ‘our’ way of life’, and positioned as being perpetually in conflict with mainstream ‘British values’. (Moore et al, 2008).

Moreover, media coverage of Muslims seemed to have ‘gained its own momentum’ (ibid., p. 10) over time, starting with 9/11 and growing since then. It suggests the presence of innate Islamophobia, where journalists do not question the dominant narratives of Muslims but simply perpetuate them. In terms of images, the research found that the most dominant images were those of lone Muslim males, particularly in police mugshots, suggesting associations with terrorism, extremism or deviance (for example, the hook-handed cleric Abu Hamza was frequently featured).

Subjects of images were commonly located outside police stations or law courts. In addition, Muslims depicted in media images were most often found in prayer, preaching, or in protest groups. This indicated a primary focus on themes either of terrorism or of cultural/religious differences, among the majority of media images depicting Muslims (ibid., p. 28).

Poole (2002) reinforces these findings, claiming that topics commonly associated with Muslims and Islam have included ‘terrorism’, politics and reactions to the war in Iraq. News coverage tends to link Muslims to global events, creating strong associations between Islam and situations of conflict and violence. Where there is domestic coverage, it tends to highlight situations that ‘focus on social tensions’, ‘raise questions over loyalty and belonging’ and consistently cast Muslims as being in opposition to ‘traditional British values’. Deep-rooted perceptions of Muslims as ‘the other’, combined with suspicion around their loyalty to ‘British values’, and ‘our’ way of life, could ignite feelings that spur users to believe negative fake news in relation to Muslims, and share images and stories that support their beliefs without engaging in critical analysis.

In recent years a fresh series of newsworthy incidents related to Muslims, such as the murder of Lee Rigby, various ISIS atrocities, and attacks in Paris, Brussels, Nice, Berlin and London, have encouraged members of the public to express their opinions about Islam and Muslims on social media. People have also become more likely to share images associated with Muslims without stopping to check their veracity.

This has led to the spread a number of ‘fake news’ stories, where images of Muslims have been linked with certain news events, taken out of context, or used to create entirely fake news. In these cases, it is not merely the mainstream media to blame. Members of the public can easily create and share fake news, contributing to reinforcing negative perceptions of Muslims and perpetuating an ongoing narrative that has the potential to do harm.

Online narratives can also cause harm in the real world, as explored by Imran Awan (2016) in his research linking a rise in hate crimes against Muslims to a corresponding rise in Islamophobic content being shared on Twitter and Facebook. Awan argues that a large proportion of comments posted on social media about Muslims possessed an ‘extremist and incendiary undertone’. He offers a typology of Facebook Islamophobia in an attempt to explain what compels people to post and share such content (ibid., p. 8).

None of the aforementioned studies, however, specifically explore the role of images on social media. Images can be powerful, even more so than words, and they dominate the contemporary media landscape. Digital technology has opened up new avenues for ordinary users to create, edit, and doctor their own images. Images on social media therefore play an important role in constructing fake news and driving the narratives that fulfil political agendas. This is a significant area worthy of further exploration.

4 thoughts on “Images of Islam: How fake news drives public opinion about Muslims”